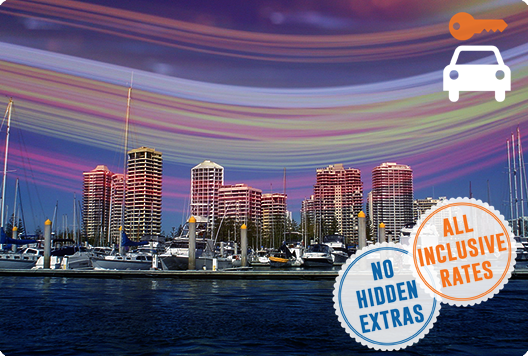 The city consists of 57 kilometres of coastline with some of the most popular surf breaks in Australia and the world including, South Stradbroke Island, The Spit, Main Beach, Surfers Paradise, Broadbeach, Mermaid Beach, Nobby Beach, Miami, Burleigh Beach, Burleigh Heads, Tallebudgera Beach, Palm Beach, Currumbin Beach, Tugun, Bilinga, Kirra, Coolangatta, Greenmount, Rainbow Bay, Snapper Rocks and Froggies Beach. Duranbah beach is one of the world's best known surfing beaches and is often thought of as being part of Gold Coast City, but is actually just across the New South Wales state border in Tweed Shire.

All attractions around the Gold Coast are accessible by car, and there are large parking lots at the theme parks and other attractions. Parking meters are found in the busiest streets of Surfers Paradise, Southport and Burleigh Heads, but free parking can be found a few street blocks away. There are paid parking areas in Surfers Paradise and Southport operated by shopping centres and the city council that charge about $1 per hour, the largest is the Bruce Bishop Car Park adjacent to the transit centre.

The Gold Coast doesnt suffer from the same congestion as Brisbane, largely because it has several business centres. The morning peak hour is 7 am to 8.30 am, while the afternoon peak is 3.30 pm to 5 pm. Roads to avoid at these times include Bundall Road, Southport-Nerang Road, The Gold Coast Hwy at Surfers Paradise and the Pacific Motorway between Nerang and Palm Beach.

Try our simple-to-use booking engine to compare car hire deals in Gold Coast. Type in your pickup and drop off locations & other information required and we'll immediately provide you with some quotations. Whether you're after an economy Gold Coast car hire, or a luxury Gold Coast rental vehicle, we have the perfect deal for you. Our low cost car rentals are provided by well-known suppliers such as Avis, Hertz and Europcar, but we can often provide better car hire rates!

Situated in the east of Australia, the Gold Coast is one of the country’s top tourist destinations. Encompassing the main city centre and surrounding urban areas, it is renowned in particular for its nightlife and surfing beaches but it has a lot more to boast about.

Whether travellers are solo, groups of friends, couples or families, many attractions and things to do will keep them entertained. Including theme parks, music, arts, and sports, some activities are free while others charge a fee. Let’s take a look at the top four!

Attractions in the Gold Coast of Australia

This is the most popular activity and it is easy to understand why. Viewing the eco system of the Tamborine Rainforest is a marvellous way to get in touch with nature. Flora and fauna exist in peace while bird-watching tours, set off daily. Open every day from 9.30am to 4pm, walking without a guide will take roughly an hour but there is also a café and souvenir gift shop to explore.

Still on the subject of being at peace with nature, this is the next most popular activity and it would be quite easy to spend all day here. From the introduction about Aboriginal history and their connection with nature, to the bird shows, it is a fun day out.

Visitors can sign up for a self-guided tour or walk around with a guide. Don’t forget to cuddle the koala bear and also watch the Australian sheep shearing demonstrations. With an emphasis on advanced ecotourism, this park pulls out all the stops to educate visitors in a fun and interesting way.

Situated on the beach with the same name, this event happens every Wednesday, Friday and Sunday nights. Many stalls are set up with independent traders including artists, jewellery makers, musicians and craft exhibits. This is an ideal place to pick up your souvenirs.

For an unrivalled 360 degree view of the region, head to the observation deck. The panoramic view never fails to impress and there are facilities within including a café, photographic service and access for the disabled. Open from 07.30 to 20.00 from Sunday to Thursday, while extending their closing hours to midnight on a Friday and Saturday. Imagine the gorgeous sunset view!

I was happy with everything. Thanks for the great service.